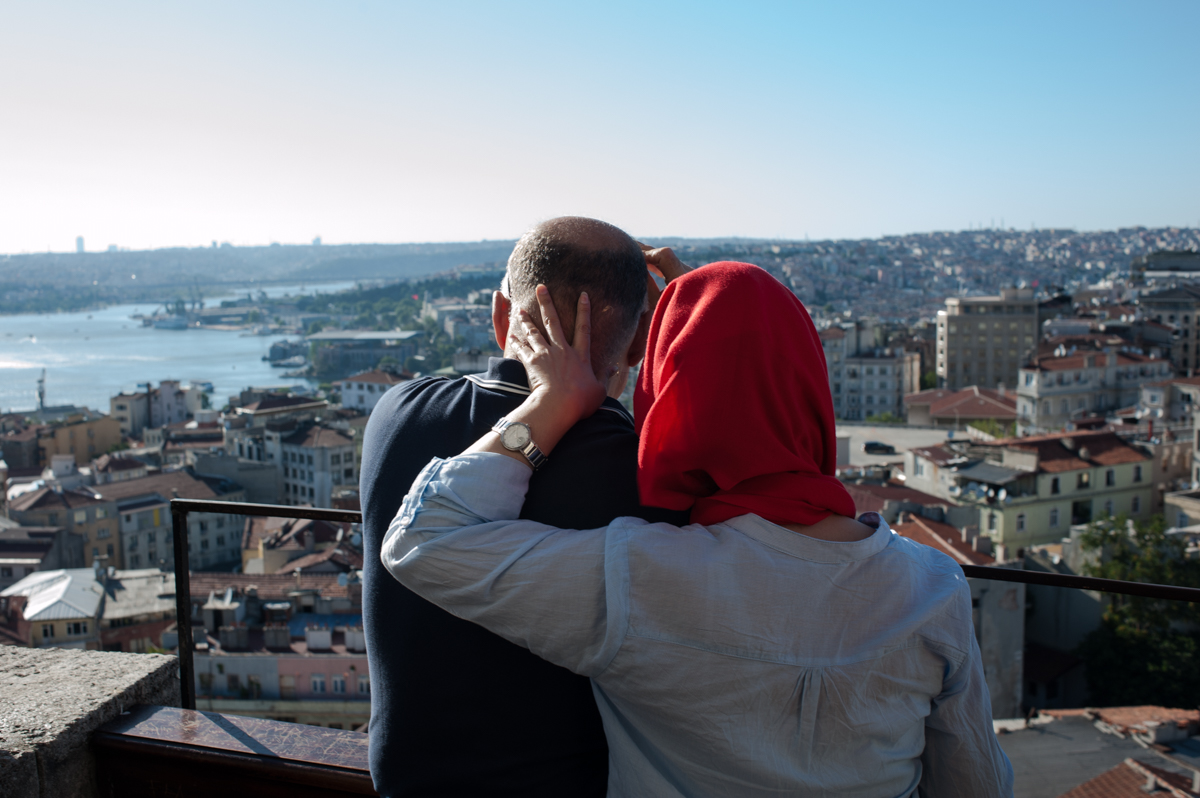 I meet Tayff Akmal for lunch in a bar in Ortaköy, a neighbourhood in the Beşiktaş district of the Istanbul Metropolitan Municipality, situated on the European side of the Bosphorus river. A 24 year old student at the city’s university, he is a member of the “Free Education Platform” (Özgür Eğitim Platformu), an independent group that helps organize training and education opportunities outside of the state system. Tayff was at Gezi Park during the long hot days of the protest. “The strong ties we built there have survived”, he tells me.
And in fact, while the protest movement may have lost its physical epicentre, it’s as if the seeds that were sown there – now the violence has subsided – are continuing to put up shoots, beneath the ashes of Gezi, through networks that have emerged across the city and indeed the country. “After they cleared Gezi, people started meeting in other parks across the city. In Istanbul alone there are 47 meet-ups taking place on a regular basis”, remarks Tayff.

In other parks, such as Abassaga in Besiktas – one of the most active districts – Cihangir and Yoğurtçu, and even in Kadıköy, on the Asian side of the river, people continue to meet, talk, make plans and look for ways of achieving more direct forms of representation in relation to the decisions affecting the city itself and the wider country beyond. Discussions revolve around the future of people’s local neighbourhoods and districts but – inevitably – a key issue is also the future of the nation as a whole, the development of democracy in the Turkish Republic and its ability to resist the growing pressure from supporters of the government and the omnipresent AKP (the party for justice and development) of premier Tayyip Erdogan, who disapprove of a protest movement which has nevertheless succeeded in making its voice heard.

Seen from a Europe “in crisis”, certain aspects of the events in Istanbul may seem hard to comprehend. Turkey, the European country with the highest percentage of under thirties, represents a success story not only because of its impressive economic results but also for the way it has steered itself towards democracy over the last decade – a journey that has brought it to the threshold of the European Union. But the protesters are not contesting the results so much as the methods with which they have been achieved – the widespread grievance being the lack of opportunities – elections aside – for participation in the country’s political process. Increased involvement in the political and social life of the country and in local decision-making is what is being called for, making the multifaceted Turkish protest movement no different from those that have emerged in other countries in Europe (Spain), North Africa and Brazil.

Istanbul, historically, is a centre of trade and commerce, but in 2012, youth unemployment edged close to 20 per cent (Eurostat) a figure which goes someway to explaining the broad make-up of the protest movements, which are not led by a single political party or a specific ideological or religious position. “The protests were attended by people from trade associations, trade unions, students, workers, professional classes, fans from the city’s three football clubs, academics and journalists” say Bade Kaya and Cemre Şen. The two both work for an agency that organizes and promotes musical events – on the face of things not an environment one would necessarily associate with politics. And yet, as we sit in the shade of some tall trees at a bar outside Abassaga park, their words, too, are imbued with the spirit of Gezi. “This aspect, this fragmentation, which at first might seem a weakness, is actually one of the strengths of the Taksim square protest movement. Various groups, with their different demands and agendas, have all been screaming their dissent at the government”. A kaleidoscope of different movements thus emerged, that on their own would not normally have much in common – and that in some circumstances might even find themselves in opposing camps. Can Ustundag, 29, works in public relations for her family’s business. Together with some friends, Can went to protest at Gezi and was caught up in the clashes. We meet in a bar in Sıraselviler Caddesi, a long street that ends at Taksim square.

Here in June, customers sitting at the tables in the inner courtyard were engulfed in teargas fired by the police, after a number of protesters took refuge here from the fighting. Can, whose job involves talking to the media, is keen to underline the attitude of the Turkish media during the protests. “When the clashes between the police and the demonstrators began in May, the media did not give the full picture and in many cases failed to give the news the importance it merited” she begins, cautiously, referring to an instance of censorship that was even criticized by supporters of the government. “During the clashes, one national TV channel showed documentaries about penguins. It might sound funny but it’s true.” And there are no shortage of similar anecdotes describing how the radio and TV stations – and not just the state-runs channels – opted to broadcast alternative content rather than show what was happening on the city’s streets. Also revealing of the current state of affairs are figures showing that there are more journalists in prison in Turkey than in either China or Iran. Meanwhile, confirming the view that the free flow of information represents a problem for Erdogan was the arrest in Izmir of 29 people for what were described as ‘violent tweets’, exemplifying the premier’s attitude towards social media, which he has labelled a “threat to society”.

To get a clear picture of the transformation the city is undergoing, it’s enough to take a walk outside along the road connecting the airport and the city: cranes, huge scaffolds and the skeletons of half-built skyscrapers are dotted around the slopes of the hills that surround this city of13 million inhabitants. Protesters claim the building work – the parade ground planned for the south of the city, the luxury residences in the historic neighbourhoods of Tarlabasi and Kağithane, the third bridge over the Bosphorus, the world’s largest airport, the country’s largest mosque, to name but a few – is all part of Erdogan’s plan to redraw not just the city’s physical landscape but also its social geography. The premier’s declared objective are the celebrations planned for 2023 to mark the first one hundred years of the republic founded by father of the nation, Mustafa Kemal Atatürk (of whom Erdogan regards himself to be the worthy successor), at which the newly-transformed Istanbul will be presented as the crowning glory of the Erdogan model. And yet, that  model – all bombast and grand gestures – is one which has completely failed to address the needs of another of the city’s driving forces – the hundreds of thousands of under thirties for whom Istanbul has in recent years exerted a magnetic pull as a hub for innovation, the centre of an ideology-free revolution. Dozens of e-commerce, mobile and renewable energy start-ups have shot up in the city over the last five years, business incubators are on hand to provide support to young entrepreneurs and freelancers, and online counselling platforms facilitate knowledge exchange and help ambitious businesses and start-ups network and make contacts. But with Erdogan’s “vision” failing to find room to accommodate this world, its inhabitants have had to make room for themselves – culminating in the events seen at Gezi Park, and elsewhere.

Sara Chiodaroli is an Italian who has been living in Istanbul for a little more than a year. Shortly after arriving, she began working in a Turkish high school and five months later found herself at Bilgi University, a private university, teaching Italian and Spanish. “There’s still a taboo surrounding politics among the students. If the question comes up in a discussion in class, the initial reaction is one of embarrassment”. Sara lives in Nurtepe, in Kağıthane district, which has changed a great deal over the last five years. A lot of the buildings constructed illegally by immigrants from central Anatolia have been bought up by the city authorities and converted into new residential areas. The neighbourhood has seen its share of protests -unrest which, though unconnected with the events in Taksim square, nevertheless grew out of the same feelings of discontent and pointed to a similar desire for greater involvement in the city’s decision-making processes. Sitting at a cafe in Beyazıd square, in front of the splendid İstanbul Üniversitesi, one of the city’s more than 40 universities, it’s fascinating to hear Sara’s point of view, her eyes sparkling with curiosity as she talks of the discoveries she has made in a city that is a source of frequent surprises. “This isn’t a secular society for everybody”, she notes. “There are two Turkeys, which struggle to talk to one other. And there are deep divisions – the same I saw in Italy between native Italians and foreigners. The difference being that here, they are between people of the same nationality. Unsurprisingly, a number of the laws Erdogan has proposed – such as a ban on sales of alcohol in shops from 10 in the evening to 6 in the morning, or the laws against abortion – have not been welcomed by the half of the country that, fundamentally, would prefer to stick with the secular model developed by Ataturk”.